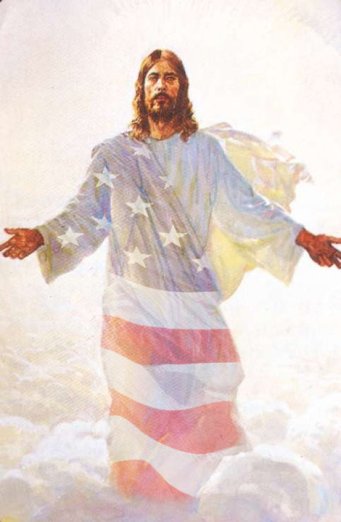 This is a repost as I sat down to set out my thoughts and realized I already wrote them out back in July.  I do think that the same question is desperately needing to be answered by believers in the days leading up to the election.  Are we serving Jesus or a version of Jesus who has been mixed together with nationalism, aka Patriot Jesus?  If we are serving Jesus, there is simply nothing to fear as HIS perfect love for us casts out all fear.  Here goes:

The US is not mentioned in the Bible.  Neither for that matter is Canada, Mexico or England.  Herr Christian no love for you, Germany is not referenced either.  Italy is mentioned, Roman Empire and all, but not in a good way so so don’t get cocky my Italian friends.  Russia and China may also get a role in the End Times, but again that is not is something to be bragged about.  When great wars are raging in Revelation, there is no obvious mention on today’s only superpower, America.  The only nation that the Bible mentions in good way and the one he focuses on as a nation is Israel.

God has not revoked or forgotten His promises to the Jewish people.  The Jewish people are going to have to go through a lot in the future before the Nation is restored to God’s correct path for them, but unless you are a messianic believer in Christ the idea of patriotism and love for Jesus for a Christian should never be intermingled.  Patriotism and nationalism are not bad things, they should just always be secondary to our love and obedience to Jesus.

Our faith should not be defined by Jesus wrapped in an American flag — Patriot Jesus is not the real Jesus.  While there is nothing wrong with loving your country and wanting it to do well in this world, particularly spiritually, mixing our allegiance to Jesus with anything else is just wrong.  Subordinating our love for Jesus to anything is a recipe for confusion and spiritual disaster.

In the Book of 1 Peter, we as Christians are called a chosen people, a royal priesthood, a holy nation, a people for God’s own possession.  The Church, the universal group of believers in Christ in this world are also called the Body of Christ with Christ as the head of the Body.  We are named as citizens of Heaven with our passport written for us in the Blood of Jesus.  No matter where we were before we entered into a relationship with Christ or who we served, upon being made one with God we become part of Jesus’ body.

The Church is also referred to as the Bride of Christ, selected by Jesus to be wed with Christ through all of eternity.  The Church is never divided up along national borders or racial or ethnic divisions.  Jesus prays that the Church be seen as loving one another and be unified, one body,one nation, one chosen people testifying to the love of the Lord under the direct leading and headship of the Lord.

It is a striking set of descriptors and it should define how we view and interact with the world around us.  Since we are specifically called out of the world, including whatever country we call home, to be citizens of heaven above all that truth should define who we answer to, where our hope is and where we place our allegiance.

I am happy to call the Unites States home and appreciate how much the Lord has blessed my country up to this point in history. I do believe that God has blessed America, just as he has blessed other countries particularly those with a high number of Christians.  However, with the cultural changes that have been ongoing since the 1960’s a lot has changed with the nation that used to hold church in the Washington DC Capital building.

As the culture turns away from God, God may treat my country differently and in ways that do not align with my vision of what the country should look like.  I want it to be a shining city on a hill as a former President once said with believers in every office and truth, justice and the American way spreading light throughout the world whilst there is an American car in every driveway.  But my mind is small and sometimes preoccupied with things that are not best to carry out God’s purpose and desire — that all of the world will come to Christs so that none may perish.

God may allow the secularist to continue to dominate society as a way to contrast the darkness and light in this world, much to my Captain America style dismay.  He may at some point call a nation to account for sins of the nation in a drastic way and every nation has many sins to account for.  The nation not the church.  The US people have been involved in some ugly stuff in the last 50 years or so — the death toll since Roe v. Wade alone is staggering.   If God does so, do I stand with God and praise Him for His perfect justice, it is always perfect, or stand with my country?

I was recently reading Romans 13, be obedient to those in power and it really struck me for the first time what God was saying particularly in regard to bad rulers.  Sometimes when there is a terrible ruler and we want to despair or fight or disobey those desires are from our flesh born out of distrust in God. I don’t trust that God is in control whether the Donald or Hilary wins the Presidency.

We should trust in God’s sovereignty – – His complete power over the situation even when the opposition party is in power because God is not surprised.  He knew Truman really beat Dewey, old presidential election reference, before the foundation of the earth.

If we know that God is who He says He is and has the power He says Has then we know that God has put that ruler in place for His reasons.  Despite our preferences those reasons can include judgment and chastisement.  As a follower of Christ, I need to be just as joyful and trusting in the Lord if my candidate loses or a corrupt, vengeful spiteful President is in office wiping his feet on the Declaration of Independence as if George Washington himself was resurrected and was planting a cherry tree on the front lawn of the White House.  Why? My citizenship is in heaven.  God is in control of all that is going on and has me in His hand. Do we trust in this truth?  Really?  Even when our country falls apart?

Nations rise and fall according to God’s plan.  Jesus’ Bride, the church will always stand regardless of what the nation is doing.  The gates of Hell can prevail against Canada or America if God allows it for His purposes, but Hell can never prevail against the Church.  God is righteous if America rises or if America falls.

Do we trust in God if He is not wrapped in our nation’s flag, but just in His perfect righteousness.  Who are we serving with our hopes, our dreams and our votes?